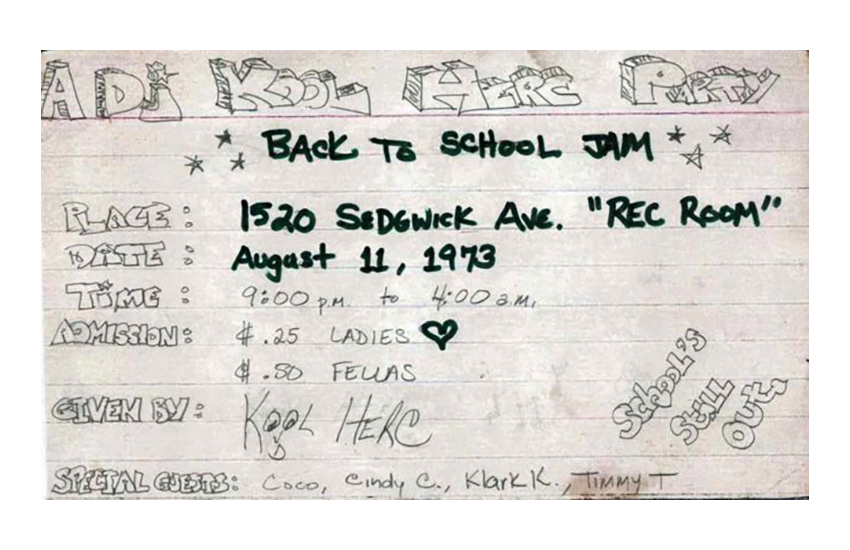 Invitation to the Back To School Jam where Hip Hop was born.

"The Holy Trinity” of Hip Hop.

Grandmaster Flash. The first DJ to manipulate records in a counterclockwise motion and is recognized as the creator of scratching.

Afrika Bambaataa. A DJ and producer, he organized block parties that introduced Hip Hop to the other New York Boroughs.

August 11, 1973 in the Bronx, Clive Campbell’s DJ’s a party his sisters are throwing as a fundraiser to buy back-to-school clothes. He incorporated his Jamaican style of reciting rhymes over records. He then debuted his technique “The Merry Go Round.” He used one turntable to isolate the instrumental beat (break) of one record and another turntable to isolate the beat of a different record. He built the beats until he established a groove. This is the foundation of Hip Hop. He dubbed the kids who danced during the breaks as “break boys” or “B boys.” Their dance style became known as breakdancing. (see A Deep Dive: Who Are Hip-Hop's "Holy Trinity"?)

The groundbreaking rap anthem "The Message" by Grandmaster Flash and the Furious Five changed Hip Hop forever by vaulting the emcee past the DJ as the face of the genre. It was written by Duke Bootee and Melle Mel in response to the 1980 New York City transit strike.