Turn of the 20th-century in the Central United States, specifically Missouri 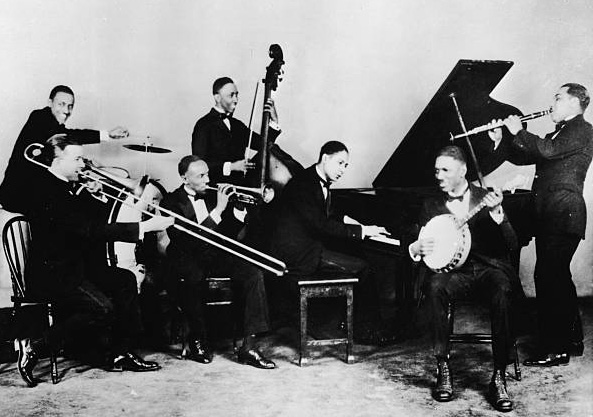 Jelly Roll Morton and his band.

Famous for its syncopated rhythm, Ragtime achieved its peak popularity between 1895 and 1919.  It was influenced by the music played during cakewalk dances (dance contest on slave plantations in which a cake was awarded as the prize), banjo playing style and the jigs of the British Isles. Although its heyday was short-lived compared to other Black music genres, it had a profound influence on the development of jazz.

The word ragtime is derived from the term “ragged music,” which referred to its syncopated rhythm. Although it has been adapted for other instruments, ragtime is a piano-specific genre. The right hand usually did the complicated rhythm while the left hand kept a steady beat. The popularity and demand for Ragtime boosted the sale of pianos across the United States.

Ragtime differed from the jazz music that followed in that it was played exactly as it was written on the page, a trait it shared with classical music. In fact, Ragtime had a profound influence on European classical composers of the era such as Claude Debussy and Igor Stravinsky.

It brings joy to me when ofttimes sad at heart
Her picture I can see, and sad thoughts then depart
Although my love is dead, my only darling Grace
My eyes are ofttimes looking on a picture of her face

From A Picture of Her Face by Scott Joplin

The King of Ragtime.

A pivotal artist during the transition from ragtime to jazz.

Composer of “The St. Louis Blues."